Comet assay, or single cell gel electrophoresis assay, is a powerful technique for quantitating DNA damage and repair in eukaryotic cells and some prokaryotic cells. This technique uses cells that are embedded into agarose, placed on a slide, which is then immersed in lysis solution. After the cells are lysed, DNA is denatured and run through electrophoresis. The resulting image obtained resembles a comet that includes a distinct head and tail. The head of the comet is composed of intact DNA and the tail consists of the DNA damage. Comet assay can be run under neutral conditions to detect double-stranded breaks or alkaline conditions to detect smaller amounts of damage in DNA that include single- and double-stranded breaks.

Due to the ease of use and ability to measure DNA damage and repair in single cells, comet assay has rapidly gained importance in the fields of genetic toxicology as well as human and environmental biomonitoring. R&D Systems offers a complete line of CometAssay products. From reagents to analysis software, we have everything you need to create standardized and reproducible results.

CometSlides™
Specially treated slides to promote agarose adherence and easy application of cells directly to each well. 2-well, 20-well, and 96-well slides are available to allow for flexibility and scalability based on slide format.

FLARE™ Slides
A 3 well slide that promotes adherence of LMAgarose and creates rapid and reliable analysis of large numbers of samples in a standard format. 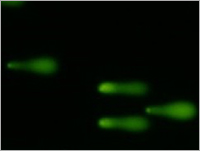 Visualization of DNA Damage using the CometAssay Kit and SYBR Gold. Human Nalm6 cells were treated with 5 µM etoposide and visualized using the CometAssay Kit (Catalog # 4250-050-K) under alkali conditions. Slides were stained as recommended in the kit instructions and analyzed by microscopy. Undamaged DNA does not migrate far from the origin, while damaged DNA appears as a fluorescent comet tail. 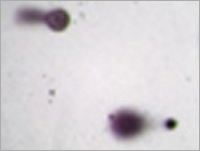 Visualization of DNA Damage using the CometAssay Silver Staining. Murin WEHI 7.1 lymphoma cells were treated with potassium permanganate and processed using the CometAssay Silver Kit (Catalog # 4251-050-K under alkali conditions. Slides were stained as recommended in the kit instructions and analyzed by microscopy. DNA damage is indicated by a comet tail shape and the overall migration pattern of the DNA.

CometChip is a high-throughput platform that utilizes a 96 well plate with specifically sized micron pores patterned into agarose. Cells in each well are captured by gravity into micropores and excess cells are aspirated, leaving an array of non-overlapping cells. Run and analyze hundreds of comet assays in a fraction of the time compared to standard comet assay.

96-Well CometChip® System
Creates 96 separate macrowells on the CometChip for ease of use. Includes a reusable cassette with a carrier base, a macrowell former, a lid and a key.

CometChip®, 30 micron
An array of spatially encoded micropores with 30 micron width, patterned on agarose. Designed to allow single cells to be analyzed with no overlap.

CometAssay® Electrophoresis System II
Designed to optimize and standardize comet assays using a CometChip. Accommodates up to 3 CometChip slides at once.

CometAssay® Analysis Software
Rapidly evaluate CometChip data by automatically locating and scoring images in seconds. Pair the software the software with our CometChip Starter kit and be able run an evaluate thousands of comet assays in a fraction of the time.

CometChip® Starter Kit
Kits contain the CometChip Kit and the 96-Well CometChip System. We also offer the option to include the CometAssay Electrophoresis System II for a complete bundle to run a CometChip from start to finish.

Untreated human Nalm6 cells run on CometChip. Human Nalm6 cells were loaded into a CometChip and visualized using the CometChip Kit (Catalog # 4260-096-K) under alkali conditions. No comet tail is observed due to samples being untreated.

Add the CometAssay® Analysis Software to your CometAssay work flow and rapidly evaluate a large number of cells by automatically locating and scoring images in seconds. The software has the capability to analyze both alkaline and neutral comet conditions in low or high throughput formats. The CometAssay Analysis Software has been specially engineered to complement and operate as the computational component of R&D Systems CometAssay and CometChip Systems. 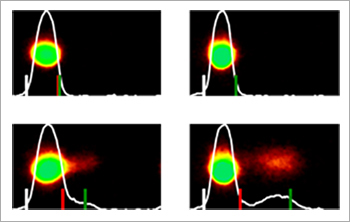 Utilize our in-house CometAssay expertise to propel your next toxicology project forward. Consult with our expert scientists to design your next project.